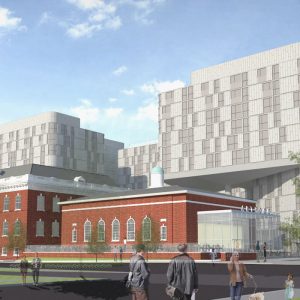 Telesis has a long and continuing engagement with the revitalization of the Parkside neighborhood in Northeast Washington, serving as master planner, developer, and financier.

At the eastern edge of the neighborhood was a vacant, 26-acre site that had once been temporary WWII housing. In the mid-1980s, the Consumers United Insurance Company working with the Trust for Public Land engaged Telesis Corporation as the master planner to create a new community. The site plan was implemented and new streets and infrastructure built. Telesis developed 100 for-sale affordable townhomes alongside fountains and playgrounds. It also redeveloped the 653 Paradise apartments complex adjacent to Parkside.

Telesis was later contracted to provide a range of development advisory services to new land owners to continue the development of the 26 acre site. With Telesis’s support, the land owners received approval for a Planned Unit Development, increasing the buildable area of the site three fold. To support additional homeownership opportunities in the neighborhood, Telesis CDE provided financing for 100 market-rate townhomes.

Once described in the national media as a “filthy broken down slum” and “the largest open air drug market in the East Coast,” the Parkside neighborhood is now thriving –home to the award winning Cesar Chavez Charter School, the renovated Neval Thomas Elementary School, Unity Parkside Health center, and new senior housing and townhomes. It was selected as one of the Department of Education’s 21 national Promise Neighborhoods and received a Choice Neighborhood Initiative planning grant from the Department of Housing and Urban Development.